Speaking of child beauty pageants (oddly, not sarcasm), Jezebel had a hilarious post from Normal Woman (to be differentiated from a Pageant Mom, which is  the title of another country altogether, one located far from the planet Earth) Tracie Egan Morrissey, who entered her baby in a pageant, “for the story”.  And quite a story it is: 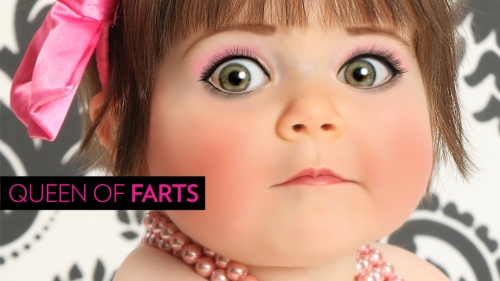 (Obviously this photo is not mine but Tracie’s and is compliments of and referring to the Jezebel article in question. Now click that link:)

Read it, weep, then have a chuckle or a bit of a laugh as you look over the ever-growing collection of pageant baby gifs that I keep making (for some reason*) and see how exaggerated they apparently are not.   The article even references an actual toddler in a Madonna cone bra, which I really thought I was “hilarious” and “over the top” when I drew it here, but when Julia Robert’s hooker outfit from Pretty Woman is something mother’s dress their 3 year olds in, then a cone bra is… child’s play. (yessss)

*  A friend recently asked me what the joke was with all of the gifs and I had no response. Now I see my response should have been to say, “The job of the artist is always to deepen the mystery.~Francis Bacon”  and then punch myself in the face. I have no idea why I keep making these ridiculous gifs, is the answer.