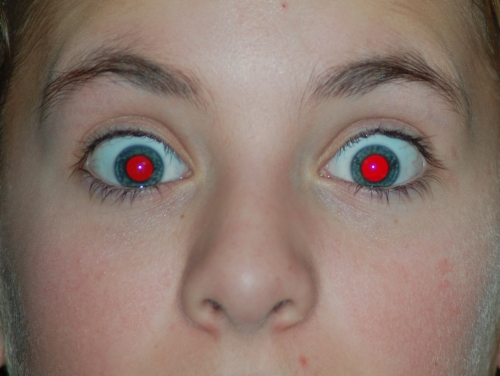 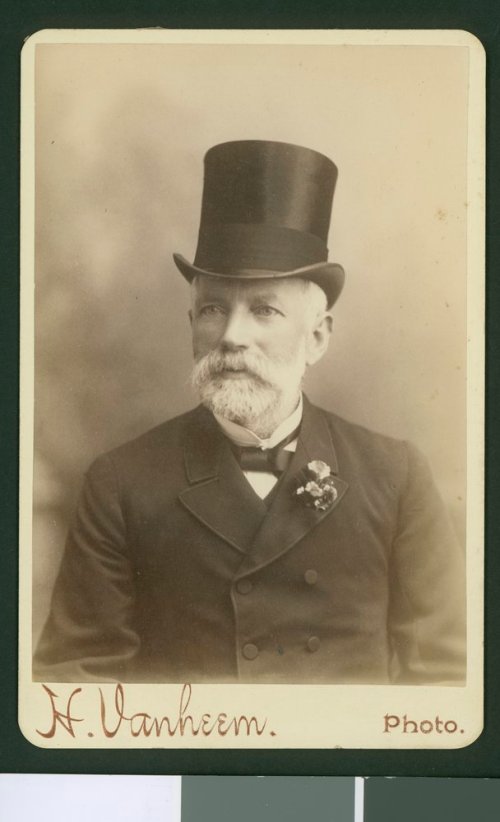 Hey 7 readers! I am truly sorry for breaking my promise of posting twice a week. When I do something, I do it right, and what I did was stop posting, and I sure did STOP POSTING.  There was work, and commissions and deadlines and then there was a legitimate family tragedy (no jokes here, pals), and then some recovery time that is still in progress. But sometimes making pictures can be helpful and I am doodling it up a little more these days so I’d like to being a return to my old form. I’d LOVE to get back into regular posting, but things being what they are and the hols around the corner, I think the thing I could be doing really well right now is not making promises I can’t keep.  Deal? Deal.

So maybe some drawings. Maybe a painting or two. Let’s see what happens.  Thanks for hanging in there, 7 readers.  See you soon(ish).

I am up late working on my Romance of the Wheel piece which I am quite excited about. In fact, so far I am smitten with it.  Let us recap some upcoming events to keep your eye on, mark in your calendar and update your RSS feed  to track (I literally have no idea how those work, but I assume you can update them… they track something):

– The Romance of the Wheel opening reception is happening at Jet Fuel on June 3rd from 9pm to the breaka-breaka dawn.  But the show is up for the entire month so even if you are a terrified shut-in who only found this blog by clicking systematically through WordPress’s entire boundless catalogue, but who lives in Toronto and might want coffee at some point in June, THIS SHOW IS FOR YOU. Did I mention I have posted some in-progess shots on Twitter?  Why not follow my twitter @GillianGoerz?

– Comics!  I have been drawing comics like a mad fool who has drawn two pages of comics.  I will be posting pages starting SOON.  There is still time to email me your best stories of drug-taking and alcohol imbibing (see prev post).  gilliangoerz(at)gmail (dot)com  (Does this parenthetical BS do anything? Does it really stop the SpamBots from filling my inbox with prescription emails from Nicaragua?  I like how thanks to internet jerks and profiteers, Nicaragua ‘s perceived number 1 chief export is internet scam artists/Princes that Require Your Help and Credit Card information).

Twitter!  Yes, I have had an account for sometime, and YES I have started to use it!  Follow me for pithy remarks, vague hinting at deeper sorrows, and twit pics of drawings, paintings and cartoons!  Did you see the drawing I did of Rick? Who’s Rick you ask?  Follow and find out!   I already have at least 17 followers, two of which are fake “Monetize Your Twitter” scams. YOU can join such an esteemed group!  @GillianGoerz

Sure, it was two days ago, but I wanted to include my still-relevant pumpkin carving:

Now that I have righteously offended illustrators I admire (Aaron Meshon sent me a cheeky email about my heinous drawings and the way they falsely depict his chin – singular. It was awesome. Is this the way you make contacts? Who shall I offend next?  How about art directors!) I will go on to post some of the photos from my New York trip to the Nuts & Bolts conference.

How about our trip to the Pencil Factory in Brooklyn? The Pencil Factory, if you didn’t know, is this amazing warehouse that’s been converted to gorgeous studios that house some really awesome young illustrators and designers.  By and large they were all awesome, chilled out, stylish and rode bicycles.

And my pictures are by and large, blurry. Alas. 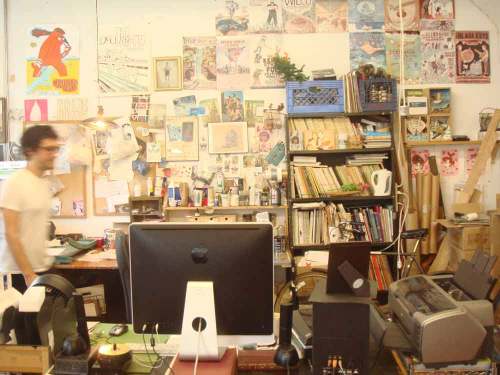 Who could that blurry figure backed by a wall full of great posters be? 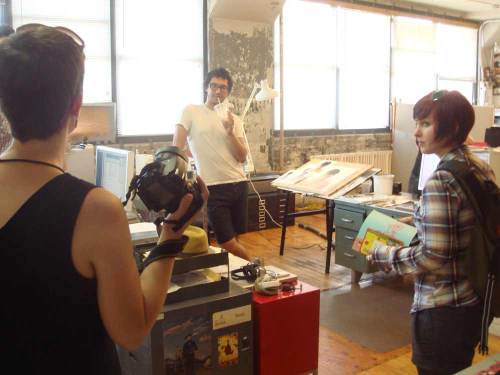 Could it be Sam Webber, casually answering questions and sipping a drink? 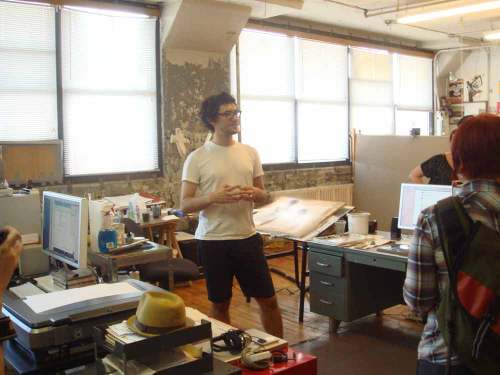 It IS Sam Webber. His new work is blurred in the background by request. Take my word for it: It was awesome.

This? Oh yeah. It's just his ORIGINAL WORKS that he let us greasy sweating assholes manhandle. NBD.

In case my fangirl ranting didn’t tip you off, Sam Webber is an amazing painter whose website you can see HERE if you don’t believe me. There are a lot of pictures of this due to it’s obvious merit and some issues with the memory card that prevented much further picture taking. But we’re not done yet! Oh, no! 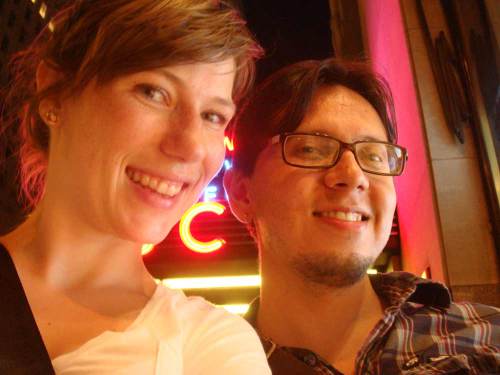 Tourists in front of a sign of some kind?

That’s me. And my friend Javier Ortiz.

Tourists below... some kind of observation deck? Studios?

We walked around a lot and ate some awesome food. 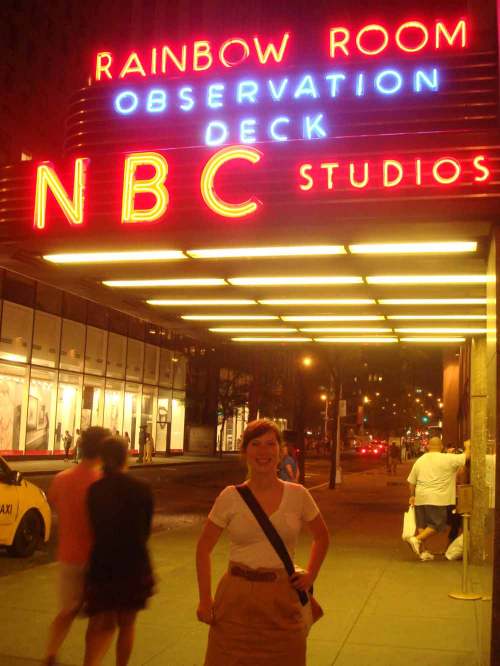 Really though, I am looking forward to my next potential trip to NY where I will try to beat art directors about the face and neck with a portfolio of some kind.  Which could open some doors…

Last weekend I made my way to New York city for the first annual Nuts n Bolts conference for emerging illustrators, hosted by 3×3 magazine.  This was a pretty swell thing for me to do, it turns out, as the speakers were excellent, the whole thing was well organized and generally awesome.

I have more photos to post later, but for now, here are some drawings I did of the presenters made in lieu of listening (I kid!) with some no doubt embarrassing and spotty note taking:

This is Charles Hively, editor of 3×3, de facto host of the whole conference. He was opinionated, smart and funny.

Charles Hively in the house, come on, lemme hear you say WHOA-OO!

The next two are of Aaron Meshon, a tragic hero plagued by copyright infringers and a ravenous hunger for justice. Seriously. So many lawsuits. His talk was hilarious, but not as hilarious as these beastly drawings of him. Aaron, if you are out there, no offense is intended*.

*I expect a lawsuit forthcoming.

More Aaron Meshon. The one with the eyes closed here is the closest to any real likeness.

Props to Canadian and OCAD alum Marcos Chin! His talk was also really funny. All of the speakers made an excellent effort to trace their roots and I think Marcos’ hard partying electric circus flashback photo montage was the most touching. These pictures don’t accurately reflect how much he was smiling and laughing through his whole talk. A delight.

Nora Krug! So classy!  I found out later she is the same age as I am (!!!!) and has already achieved more than I will have when I collapse from fatal obesity in front of the radiator in my barren apartment at age 104.

Paul Hoppe is the brain behind Rabid Rabbit. He spoke well on the importance of personal voice. Really, the whole conference was very inspiring.  Yay Paul!

This might be my favorite drawing of the set. Meet Steven Tabbutt. His paintings are the kind that make you jealous you didn’t think of doing them. Ridiculous. Click his name and see his site. Right now.

My personal and heartfelt apologies to the lovely professionals whose likenesses I have befouled here, and more apologies to Chris Buzelli and Marshall Arisman whose talks I refrained from sketching through. Marshall is basically my stepdad 2.0 so I very much related to the “either this is a bold faced lie composed of the foulest bullshit or a fundamental yet long forgotten truth that reaffirms my belief in life, magic, goodness and myself” approach. Very charming.  Chris Buzelli and Aaron made a Smothers Brotherly duo of comedy and filial love – I want to actually hang out with these people, socially. Karaoke anyone?

This is a little old, but I was thinking about it and laughing, again. While I have yet to be featured/published/mentioned in Juztapoz magazine, back in April, my gentleman caller made his auspicious debut, and I can say with confidence we are all very proud and impressed:

Seriously, though, how great is this?  We were at the Show and Tell Gallery checking out this show when we noticed some photographers, but did not think it would come to this magical conclusion.  Here’s the picture in context on the website (and with the appropriate photo credit):

p.s. When viewed in the round, the toque actually says “SASK WHEAT POOL”. When turned it can also say “heat pool”, “at pool,”  “ask wheat,” “ool sas” or of course, the above.  Anyway, great hat.

An Opening! This Thursday!

I am showing my work! In a sweet clothing collective/gallery near my house run by a bunch of awesome women!  The opening is this Thursday (June 17!)! It’s all very exciting and would be even more so if I didn’t have a research paper due the same day (*histrionic SIGH*).  But even with that  thrown into the mix, it is still exciting, maybe more so.

Check out the place:

One of their fantastic window displays. (photo from sugarfirejewellery.blogspot.com)

Why not read an article on Freedom from blogto.com? (mind you, it’s from 2007, but that’s merely a testament to their staying power. Most clothing collectives can barely eek out a year, let alone 3 or 4, let alone creating and maintaining a store as beautifully curated as this one).

It’s a really lovely store, made lovelier right now by a bicycle from the store I work at (Curbside Cycle), which was used to attractive effect in their ever-famous window displays.  Too much hawking (hauking?) of the place? Sorry. I just like it, is all.  And they wanted to out my pictures up.  Which is nice.

Me. Roy Thompson Hall. 400+ other OCAD grads. One night… of TERROR.

Actually, more like one long and awesome afternoon of pomp, ceremony, celebrity and hats made seemingly of steel wool (I am looking at you President Sara Diamond, and thinking you look FLY).  Superstar illustrator Anita Kunz and superstar musician Buffy St-Marie (whose speech was really excellent) were awarded honourary doctorates, and I got to walk the stage!

Technically I am still not a graduate since I am currently completing my final .5 credit, but I  got special permission to participate, because seriously, how anti-climactic would it be to do this an entire calendar year from now?  Very anti-climactic.

Pictures of the actual grad show are on the way, but for today here are a few snaps from the ceremony itself: 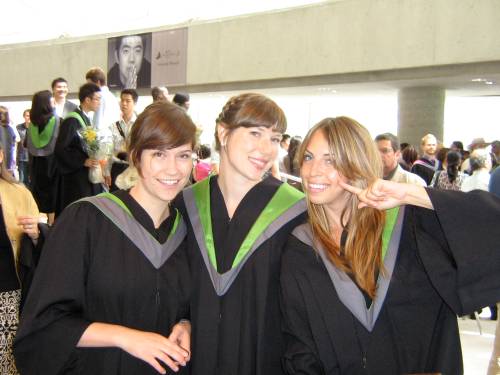 The future is NOW!

Left to Right: Ali Hall, me, Carla Poirier. Click their names to see their wonderful work! 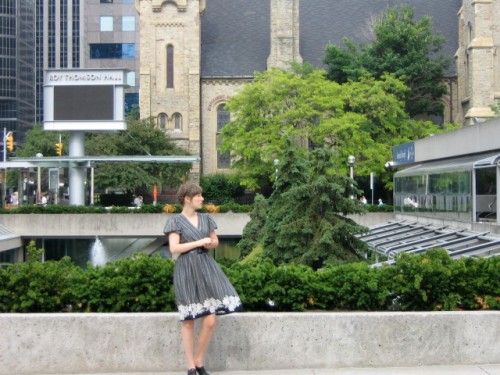