I know, I know – who uses the mail anymore?  Well, I am going to a little bit when I send out these postcard mailers. If everyone in art/design school  is being advised that this is an arcane practice (they are), then it means maybe my antiquated paper promo with authentic “stamps” will be unique!  Special! Not at the bottom of a pile of similar crap!  We’ll see. I’ll send them out and see what happens. That’s like, The Secret, right? These mailers are my intentions and the post office box is the universe, and my future clients are god or something? I haven’t read that book.

Oooh! Sexy promotional piece! If you are a magazine or publisher, look out. This might be under a romance manuscript in your slush pile. Just staring off to the left of you. Asking, “What does it all mean?”

It means hire me.

Another drawing that was made as a kind of hostess gift. I made it for my friend Amy who invited me to her party. I finished it much, MUCH later than the party and am now giving it to her via this post, a la, the internet. Thanks for the Summer party, Amy!

This little diva models herself after the late great Elizabeth Taylor.  She’s got diamonds (fake rubies) on her neck and stars (and hearts) in her eyes.

Speaking of child beauty pageants (oddly, not sarcasm), Jezebel had a hilarious post from Normal Woman (to be differentiated from a Pageant Mom, which is  the title of another country altogether, one located far from the planet Earth) Tracie Egan Morrissey, who entered her baby in a pageant, “for the story”.  And quite a story it is:

(Obviously this photo is not mine but Tracie’s and is compliments of and referring to the Jezebel article in question. Now click that link:)

Read it, weep, then have a chuckle or a bit of a laugh as you look over the ever-growing collection of pageant baby gifs that I keep making (for some reason*) and see how exaggerated they apparently are not.   The article even references an actual toddler in a Madonna cone bra, which I really thought I was “hilarious” and “over the top” when I drew it here, but when Julia Robert’s hooker outfit from Pretty Woman is something mother’s dress their 3 year olds in, then a cone bra is… child’s play. (yessss)

*  A friend recently asked me what the joke was with all of the gifs and I had no response. Now I see my response should have been to say, “The job of the artist is always to deepen the mystery.~Francis Bacon”  and then punch myself in the face. I have no idea why I keep making these ridiculous gifs, is the answer.

A few pals + A fun day of food and games = A few doodles! Thanks for a great day, pals (and well done to Steve, Ali and the other friends who came and went on a delightful day in).

This is Magenta (her parents think they are the first people to use “Magenta” as a name).  Her sassy attitude won her Grand Supreme at the Glitter Smiles Princess Pageant and she’s sure to take home a crown today!  Her favourite food is popsicles and her favourite colour is – Oh no you di’in’t – oh yes they did – MAGENTA!

I love my bike.

It’s true. I do. This blog is evidence to the fact that I am somewhat immersed in biking, or at the bare minimum in making bike-related art things.  I recently did a graphic design job for Bikes Without Borders (check it out. Very worthy organization on every level), and was offered the chance to do a t-shirt design to benefit the organization.  Because I have a charitable heart (hungry ego) I agreed to help (see my design on t-shirts in a real store).  This is the design.

It’s part of a larger drawing I am working on that is a little more political. (I hope to finish it soon) I took the non-partisan part and repurposed it to focus on the experiential, elevating  aspect of cycling; namely being outside and having some chill time with yourself in nature. Who doesn’t like that?  Some politicians in the US (and Canada, who am I kidding?) would no doubt LOVE to hinder this among other freedoms, but for now, when you are on your bike, it is all you.  Let’s enjoy that.

Just a doodle to keep the seat warm until Saturday when a “more legit” post will take a shift at the wheel. Road trip metaphor!

Excuse me, sir? Is this your secretary?

An ill-conceived typography joke. But I like the cute fox and the fat, fat dog. 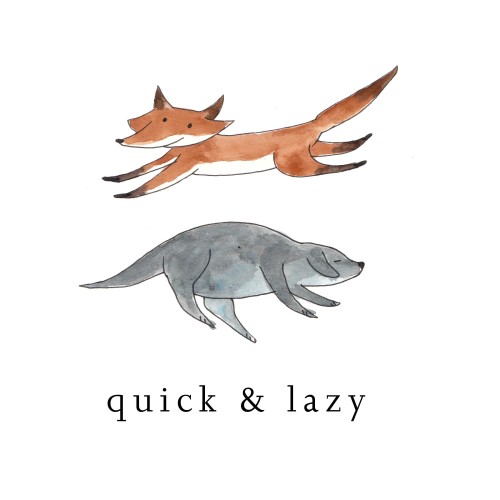 Follow me at @GillianGoerz to get many links that will take you right back to this site.  INTERNET!

Also, I feel that sometime people don’t know that I have an “Official” site outside of this blog. It is GillianG.com  and you would do well to observe it, as it the better pictures from this blog with less drivel (writing).  Beat that.  INTERNET!

When Your Best Friend Is Pregnant…

…sometimes it turns you into a little bit of a crazy person.